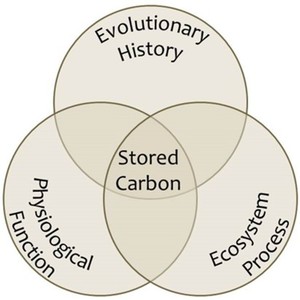 Using a series of manipulative and observational studies in the fire-dependent longleaf pine ecosystem, the Aubrey Lab has been exploring how stored carbon dynamics are controlled by a combination of evolutionary, physiological, and ecological pressures. Despite the importance of carbon storage to tree physiological processes (e.g., response to disturbance) and the forest carbon cycle, our process-level understanding of the controls on carbon storage pools and fluxes remains relatively poor. 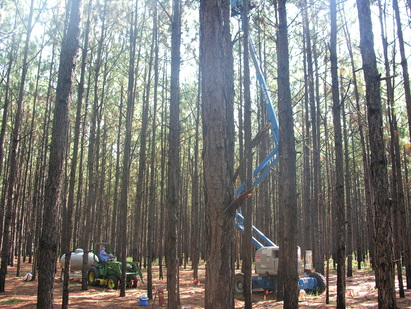 One of the longleaf pine study sites where belowground carbohydrate supply was manipulated via scorching treatments.
Our manipulative studies support the concept that stored carbon pools buffer metabolic carbohydrate demands when photosynthetic supply is restricted. For example, roots of longleaf pine contained large stored carbon pools that maintained belowground metabolism for a year after the photosynthetic carbohydrate supply was restricted. Likewise, the concentration of stored carbon in the smallest, most metabolically active roots was not influenced until nearly one year later. Our observational studies indicate that stored carbon pools differ among closely related pine species with overlapping natural distributions, but evolutionary histories of different disturbance frequencies and thus, different selective pressures on carbon storage. Our comparisons of stored carbon pools between longleaf trees growing under xeric or mesic soil moisture regimes, in combination with other drought studies, indicate that allocation toward storage exhibits plasticity through space and time in response to both short- and long-term variations in resource availability. We expect a continuum of stored carbon responses to disturbances related to ecological niche and adaptation that influence the availability of carbohydrates for metabolic demands, as well as a continuum in stored carbon pools and metabolic buffering capacity among species as well as spatially, temporally, and developmentally within individuals of the same species.